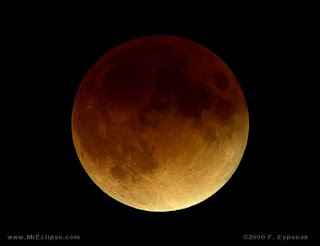 LUNAR ECLIPSE: On Wednesday night, February 20th, the full Moon will turn a
delightful shade of red and possibly turquoise, too. It's a total lunar
eclipse-the last one until Dec. 2010. Sky watchers in Europe, the Americas,
parts of the Middle East and Africa are favored for good views of the
two-hour event. Visit http://spaceweather.com/ for full coverage including
maps and timetables, live webcasts and discussion.

SPY SATELLITE UPDATE: The US Navy's first attempt to hit malfunctioning spy
satellite USA 193 with a missile could come on Wednesday night during the
lunar eclipse. This is based on an air traffic advisory warning pilots to
steer clear of a patch of Pacific Ocean near Hawaii just when USA 193 is due
to pass overhead. Until the satellite is shot down, it remains visible to
casual sky watchers during evening passes over US and Canadian towns and
cities; experienced observers say the decaying satellite is sometimes as
bright as the stars of Orion, making it an easy target for unaided eyes and
off-the-shelf digital cameras. Details, photos and more information are
available at http://spaceweather.com/. Subscribers to Spaceweather PHONE
(http://spaceweatherphone.com/) will receive email and telephone alerts when
the spy-sat is about to appear over their backyards.